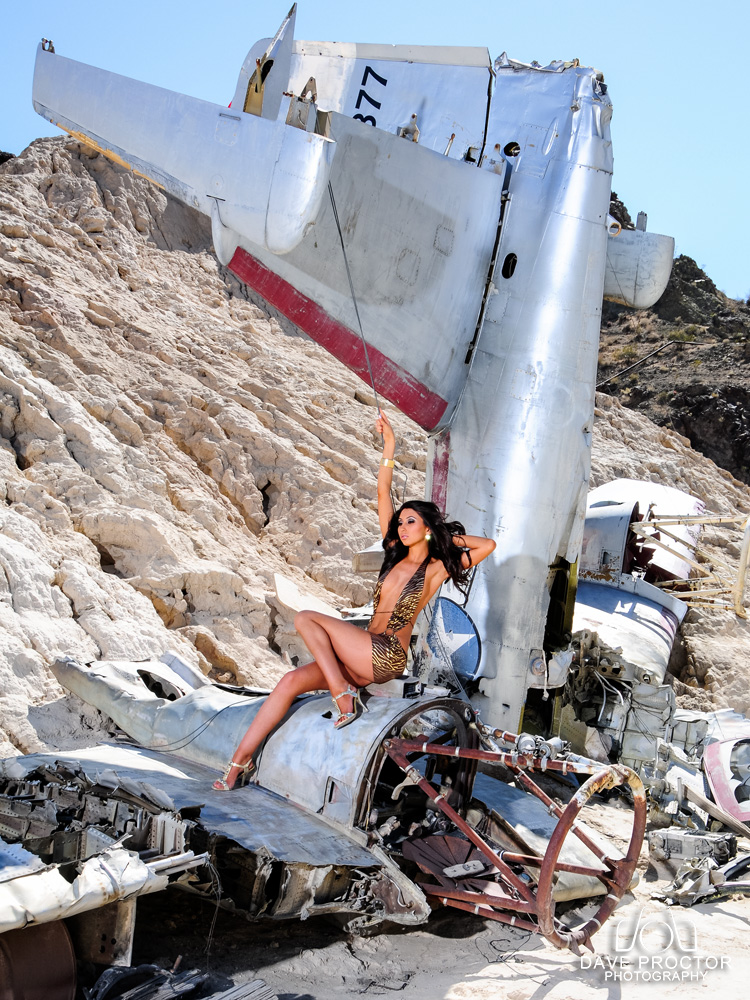 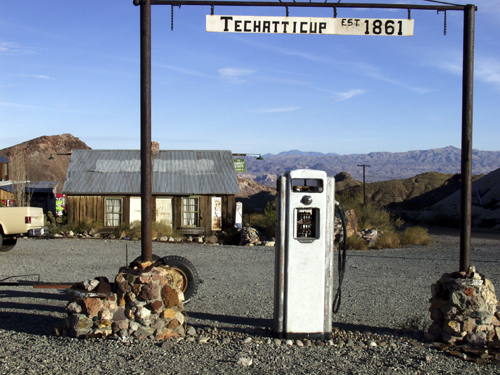 The Techatticup Mine, what is it? Well other than a great place to take pictures it is also the oldest, richest and most famous gold mine in Southern Nevada. It is also the ONLY real mine in southern Nevada that you can go into SAFELY!

Tony and Bobbie Werly bought the mine and the area around it back in 1994 they have been working on restoration of the mine, the buildings around it and adding artifacts. 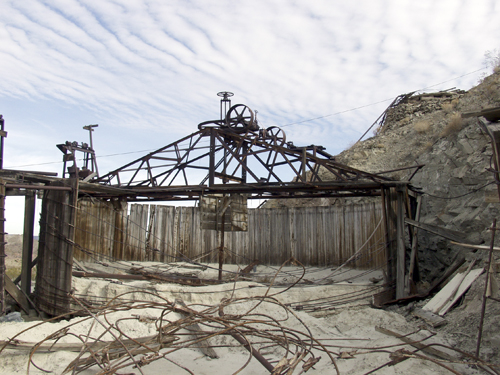 One of the first things they did after discovering a ground level mine entrance was to dig it out, tons of mine tailings had flowed into and past the entrance from the stamp mill just a short ways away. This all but completely closed this entrance. After months of digging they finally cleared enough away to start working on the inside of the mine.

One of the visions Tony and Bobbie had was to open the mine up to tours. However to do this they first had to bring it up to code. This is why I say this is the only mine that you can do into safely, inside they installed safety equipment, steel walkways where needed, lights and made sure it had proper ventilation.

However they did not stop there… They also made sure that the part of the mine that is open and part of the tour is well stocked with history. Inside you will find tools that the miners used back in the day, pictures and other things, (I don’t want to ruin your surprise) maybe if you are lucky you may even see a ghost. Yes, some people say that the mine is haunted but that’s another story for another blog post. 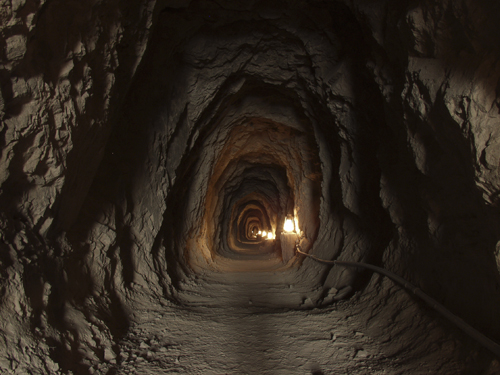 One of the nice things about this place is no matter what time of year it is, it is always cool inside the mine. It stays about 70 degrees year around.

With the improvements that Tony and Bobbie have made, the mine tour is an easy one. You don’t have to worry about falling down a vertical shaft or climbing around rocks or other stuff. As you can see from the picture to the right, it’s easy traveling. Unlike the old days when there were rails, ties and ore cars running though this tunnel. 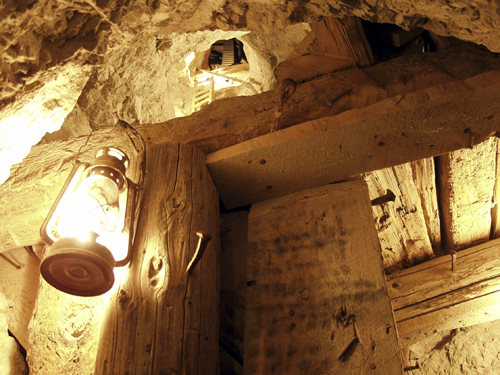 There are 12 tiers, making up some 22 miles of tunnels in this mine. Most are closed off to the public and some are underwater due to the water table. The miners did not care about anything other than following the gold veins, where the gold vein went the miners followed. This includes, up, down, sideways or off on some crazy angle.

And by the way, that vertical shaft in the picture to the left, it goes strait up almost 600 feet. 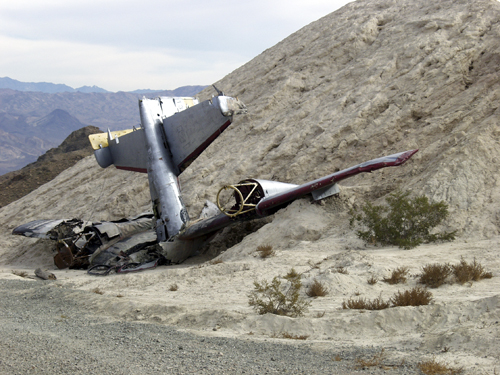 Outside the mine there is plenty to see too.  There are 1000’s of things laying around that make this place very unique.

That could be why it is a popular place to film movies, music videos, commercials and of course model shoots.

Some of the movies filmed there were “Breakdown,” “Eye of the Beholder,” “Johnny and the Highrollers,” and “3,000 Miles to Graceland.”  In one part of 3000 miles to Graceland Kevin Costner blew up Lucky’s Gas Station, if you saw that movie, that was the place that had the plane as the awning over the gas pumps. You can still see the plane, or maybe I should say, what’s left of it. It sits across the road now from where it used to be. 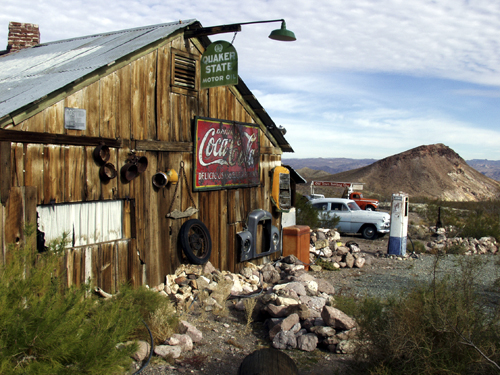 With so many rich backgounds, Techatticup is a gold mine for photographers. It is one of my favorite places to go shoot models when I need to test new camera equipment or update my portfolio.

Sometimes people ask me why I go back there over and over again. My answer, two reasons, the first one is that Tony and Bobbie are great people, very down to earth and full of knowledge of the mine and area.  I’m kinda a history buff and given a chance I would listen to tales and facts about this place till well after sundown.

The other reason? where else can someone get pictures like this? 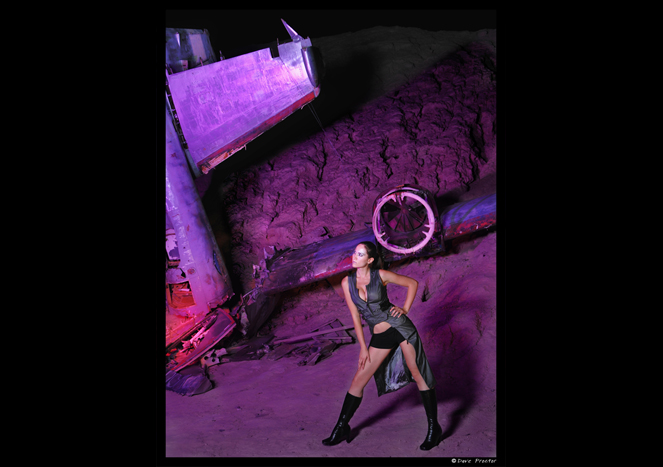 To get to Eldorado Canyon: From Vegas, take 95 south towards Boulder City, just before Bulder City US95 and US93 split, continue on US95 south for 13 miles to SR 165. Turn left on SR 165 (Nelson Road) for about 11 miles to Nelson. Continuing from Nelson, the Techatticup Mine is just a few more miles down the winding road, go slow after Nelson, it’s quite a drop if you was to go off the road and a few miles beyond that, is Lake Mohave.

Also, keep an eye out for wild things!  I have seen Desert Tortoises, Big Horn Sheep and a Fox crossing the road between Nelson and Techatticup.

Oh wow, looking back up at these pictures I took reminds me I need to make another trip here but this time, without a model. Those “non” model pictures were taken back in 2001, digital cameras have came along way since then.  Now I have an excuse to go back down there and shoot some new pictures just for fun!

Here is the link to the Techatticup Gold Mine website