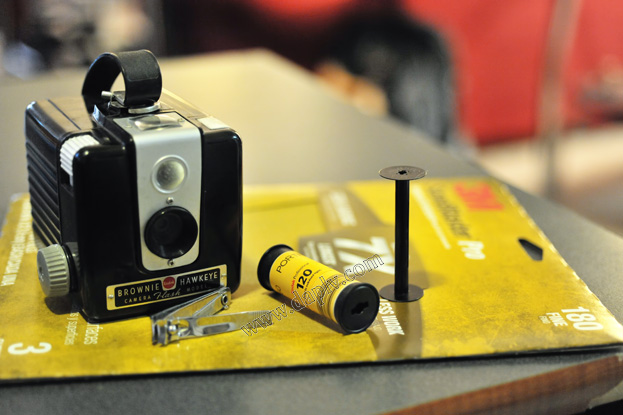 In today’s world of Instagram and all the Hipster filters most people forgot what really started it all.

Brownies, no not the type you put in your mouth… Back around 1900 Kodak wanted to produce a cheap camera for people to use for everyday snapshots. They produced millions of Brownies however one of the most popular Brownies ever made was in the 1950’s and that was the Brownie Hawkeye (Flash) 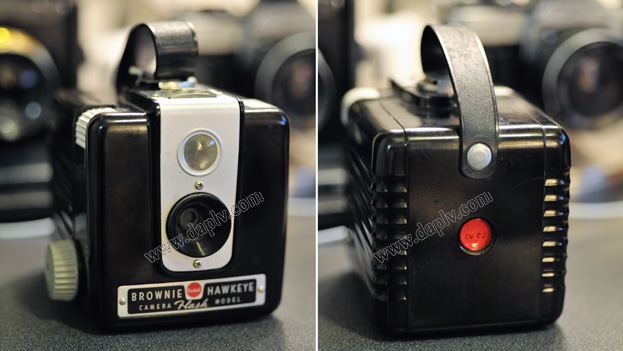 Today you can find these in Thrift Stores, Yard Sales and on eBay very cheap. Many people saved them thinking that one day they would be worth money. Only problem with that was Kodak made so many, millions of them, so the value of these old cameras never materialized.  For those of us that like these old cameras or those of you that want to play with them, this is good news.

The Brownie Hawkeye takes 620 film, unfortunately no one makes 620 anymore. However, all is not lost.  Kodak, Fuji and many others still produce 120 film in color and black and white.  With a tiny bit of work, you can use 120 film in your Hawkeye.

120 & 620 film are exactly the same film, nothing is different between them other than the spools the film is placed on. 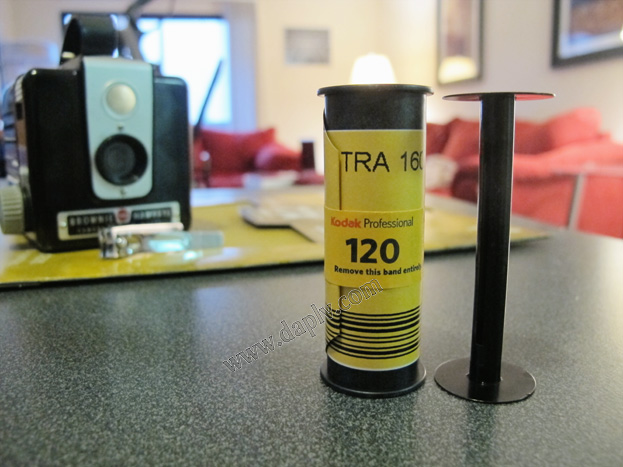 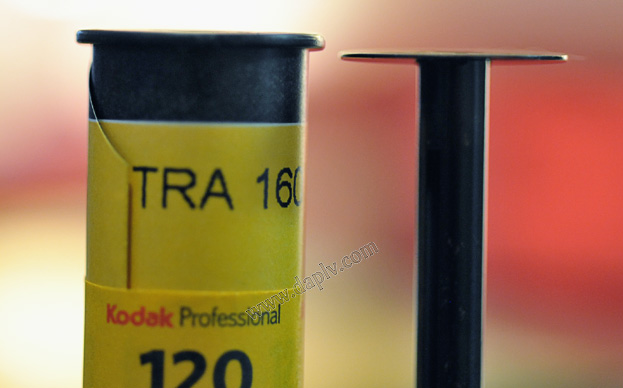 The other thing different about the spools is the holes on the ends. The 620 spool has smaller holes. So when you use your modified 120 film in the Hawkeye, make sure you have an original empty 620 film spool as your take up spool. Don’t try to use a 120 spool for your take up spool. Most of these old Brownies still have a empty 620 spool in them, if not you can get them cheap on eBay. 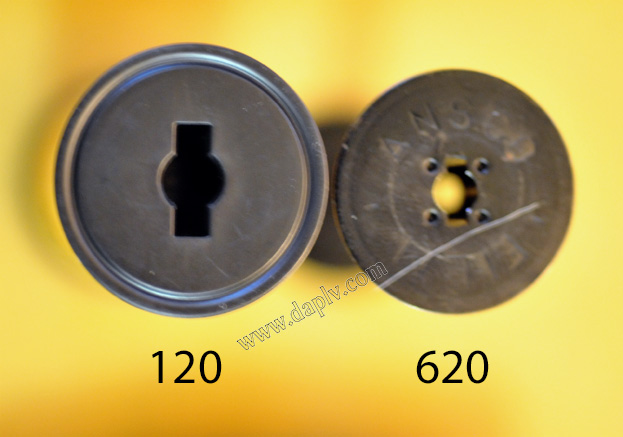 Now onto the modifications…  You don’t need much, just some sandpaper and fingernail clippers, and of course a roll of 120 film. 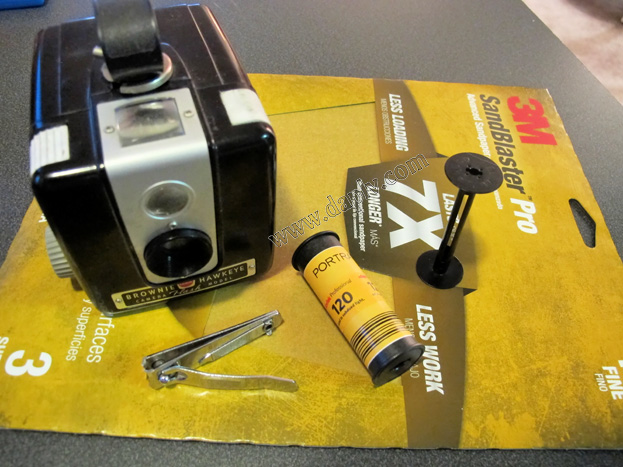 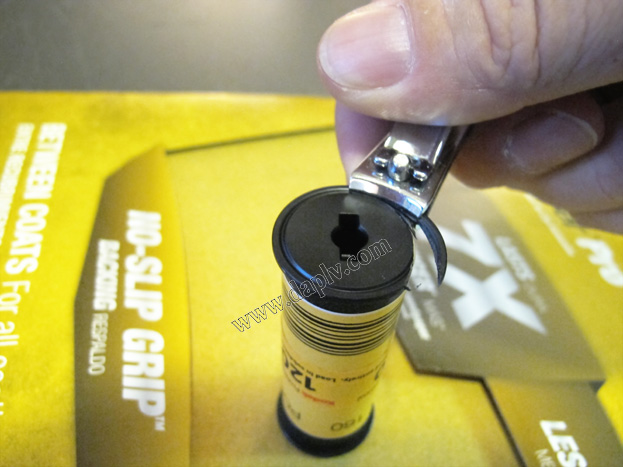 after that, take your sandpaper and sand both ends of roll to make the 120 roll the same height as the empty 620 spool you have. That’s it, you are ready to load the film and start taking pics with the Brownie Hawkeye.

If you are like me, I did not want to have to sand every roll of 120 before using it so I also modified the camera to take the slightly wider 120 spool.  This way all I need to do is use nail clippers to trim the lip from the 120 film and it’s ready for use in the Brownie. 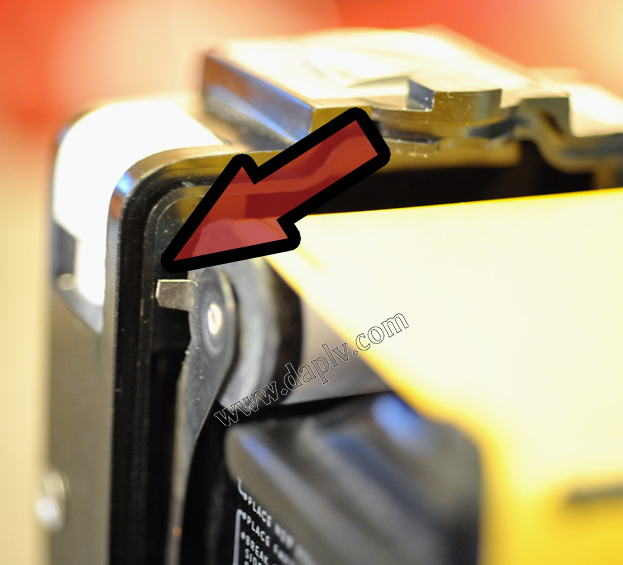 That’s it’s, film is loaded and ready to go.  Things to remember, always use a empty 620 spool on the bottom. If you send your film to a lab for developing, make sure you ask for your empty spool back, it also won’t hurt to tell them that it is a special 620 spool and you want that particular spool back and not just any spool.

Most of us want to shoot more than one roll at a time, to do this, prep however many 120 rolls you want before leaving home and make sure you have an equal number of empty 620 spools, again, eBay is a great place to find empty 620 film spools. 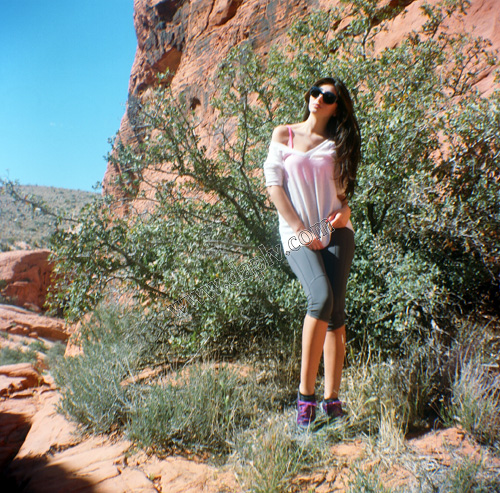 image shot with the above Brownie Hawkeye camera after conversion.

Two Photos for Every Scene