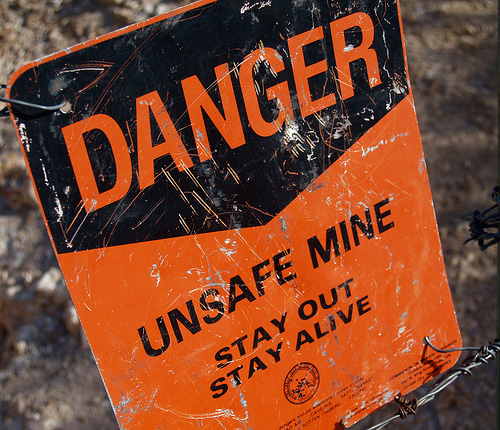 Living here in southern Nevada means more than just flashy lights, gambling and wild nights on the strip.  Just outside of Vegas is where a not so much though about danger lurks. Mines! Not the kind that go Boom! But the other kind…

Do you know that on an average, 210 people each year die due to going inside an old mine, riding ATV’s around open shafts or falling into an uncovered vertical shaft?

Some of the hazards of abandoned mines are: open shafts, horizontal openings resulting from underground mining, dangerous water, rusting machinery, cave ins, rattlesnakes, defective explosives leftover from who knows when.  But that’s not the only way to get hurt or worse.  Many of these hazards are the result of mining that occurred many years ago — some before 1900. There is nothing of value left in abandoned mines,  that’s why they are abandoned.

While checking out old mines may sound cool, in reality all it is, is a hole in the ground. Not really something to get excited about.   What do you really expect to find inside one?  Jimmy Hoffa? Something of value?  There is only ONE thing you will find in an abandon mine, and that is TROUBLE!

Here is something else to think about…  Where do you normally find abandon mines at?  Yup, far out of the cities and towns, normally no where close to emergency help so if you should find yourself in trouble help is a long ways away.

And that is only if you can reach them somehow. Cell Phones don’t work so well in mine shafts and even if you “left” someone outside in case there was trouble, how long would it take that person to call or go get help and for that help to get to you. Keep in mind that help may be within an hour away but unfortunately you only have minutes…

How dangerous is it? Let’s take a look at how many ways you can get yourself in trouble or die in a abandon mine.

Air
“Bad Air” is one of a miner’s greatest fears.  While most dangers are obvious, air containing poisonous gases or insufficient oxygen cannot be detected until too late.  Poisonous gases accumulate in low areas and along the floor.  Walking into these low spots causes the good air above to stir up the bad air below, producing a potentially lethal mixture.

Another aspect of bad air is found when exploring mine shafts.  While descending into a shaft may be relatively easy, climbing out may prove to be very dangerous.  Climbing produces a level of exertion that causes a person to breathe deeper than normal.  This increases the level of noxious gases being inhaled.  This may result in dizziness, unconsciousness and possibly death. Furthermore, even if the gases prove to be non-lethal, they may cause the victim to fall while climbing.

Standing water absorbs many gases.  These gases will remain in the water until disturbed such as when a person while through it.   As the gases are released, they rise behind the walker where they remain as an unseen danger when the person retraces his steps.

Cave ins
Cave-ins are unpredictable.  Often, areas most likely to cave-in are the hardest to detect.  Minor disturbances like the vibrations from footsteps or speaking can cause cave-ins.  The sudden crush of falling earth produces either serious injury or instant death.  Perhaps even more terrifying is being trapped behind a cave-in with little or no chance of rescue; in effect being buried alive.

An adit is a horizontal mine opening.  Adit entrances can be especially dangerous because weathered rock deteriorates over time.

Falling
There are numerous ways to get injured by falling at an abandoned mine.  Some are obvious, such as highwalls and shafts.  Others are not so evident.

Ladders made of wood can have broken and decayed rungs as well as rusted nails.  Some can even collapse from dry rot under their own weight.  Metal ladders are not any better as their anchors are often broken or placed in unstable rock.  Stepping on the ladder may cause it and the entire shaft to collapse.  All ladders are dangerous!

Mine tunnels frequently have shafts in them that are covered with boards.  These timbers may be hidden under dirt, fallen rock or other debris.  The weight of a person on these old boards might cause them to collapse without warning, sending the victim tumbling deep into the shaft.

Loose Rock
Rock degrades over time by being exposed to air and water. Loose rocks can fall at any time and cause serious head injuries.

Dynamite
Even experienced miners hesitate to handle old explosives. They realize the ingredients in explosives will deteriorate with age and can detonate at the slightest touch.  Many abandoned mines contain old explosives left behind when the operation closed down.  Innocent looking sticking and blasting caps are potential killers.

Structures
The structures around abandoned mine sites gradually deteriorate and at best can be extremely hazardous. Going into old buildings or climbing on old structures can be very dangerous as they may collapse.

Drowning
Most people who drown also fall into a vertical shaft.  Many mine operations excavate to depths below the local water table and use pumps to keep the mine dry while it is in operation. When mining stops pumping is discontinued and the quarry floods by the inflow of cold ground water. This ground water inflow can keep these quarries cold even in late summer. Most people are unable to swim very long in the extremely cold water. At least not long enough for help to arrive.

If you are near Vegas and interested in going into a SAFE mine then I suggest reading this post about the Techatticup mine.

So Long, and Thanks for All the Fish